Summer is finally over, but it’s been one to remember. As usual, OUP’s four-day intensive course and conference for teachers in Budapest at the end of August is the sign that the new school year is upon us, a warning bell of sorts for us to make plans and get prepared for the much-awaited (dreaded?) becsengetés. It’s always an encouraging sign to see how many teachers are willing to devote the last few precious days of August to professional development. It’s a real sign of commitment. Either that, or teachers are just desperate to get out of all those boring start-of-year staff meetings and fire-and-safety presentations. 🙂

A sad note this year was the news of the death of Headway co-author John Soars, whose materials have been extremely influential here in Hungary as well as around the world. Many teachers signed a card of condolence and paid personal tribute as well. One teacher wrote “Once I was a  Headway student; now I am a Headway teacher.” Few ELT coursebooks can have had such a sustained impact and influence. May he rest in peace.

The course itself was as good as ever. As well as morning sessions for the various groups, there were also afternoon plenaries. My own plenary was an updated version of the ‘Gates and Bridges’ talk. As promised, you can access a pdf copy of the slides here:  Gates and bridges Budapest

The conference on the last day was on the topic of images and videos. The keynote speaker was Images author Jamie Keddie, who gave two fantastic plenaries. I’m already looking forward to trying out a few of his ideas in class.

Good luck to everyone for the new school year! 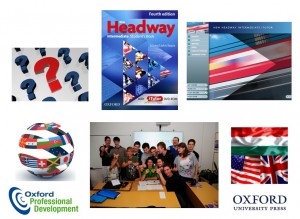 I wanted to think about how we can use the topics and materials from Headway to provide engaging and stimulating lessons for learners; lessons that not only provide them with the chance to practise and improve their English, but also with the chance to broaden their horizons and begin to think about some of the more exciting implications of being a young speaker of English in 2012.

The session zoomed in on one aspect of modern living in particular: multiculturalism and mixed-heritage families, a topic area that features quite strongly in the series, but especially in the video materials of the iTutor. I’ve tried these materials out both with my own students at Babits and with a group of students in Paks, and I’ve found the topic area lends itself extremely well to class discussions and also prompts students to contemplate how their own lives might develop in a multicultural direction.

The session contained a quiz, activities in connection with the listening and video materials from Unit 1 of the iTutor, and some examples of written work done by my students in response to the topic. I was pleased to see that my students’ views of mixed-heritage families were overwhelmingly positive, and that the importance of language learning was reaffirmed and validated by their comments. Whatever their future lives have in store for them, they are already clear in their own minds that knowing foreign languages will bring them closer to other people and other cultures. And that has to be good news.

The slides from the session in pdf format: Engaging lessons with Headway iTutor

I was in Paks on 23rd April doing a demonstration lesson from Headway Fourth Edition with a group of students from the Vak Bottyán Gimnázium. Being watched by others while you teach a lesson to students you’ve never met before is not exactly easy, but it’s certainly exciting!

The lesson was from the Intermediate level of the series and I used some of the materials on the iTutor to put together a lesson on multiculturalism and familes of mixed heritage. 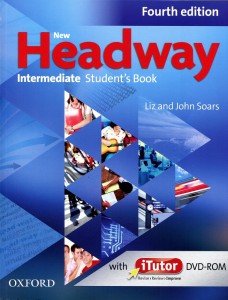 We began with a quiz. Some of the questions were pretty tricky… 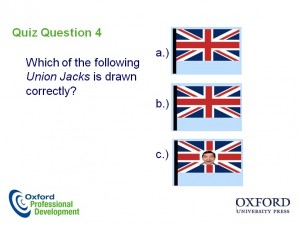 Answer at the end!

Others were a bit easier… 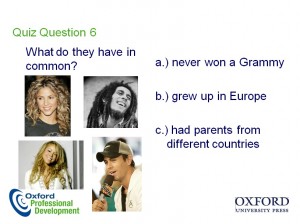 Answer at the end!

We then did the Listening and Speaking task ‘A world in one family’ from Unit 1, which introduces a family of mixed heritage and discusses some of the pros and cons of growing up in such a family. We then moved on to take a quick look at one section of the video from the iTutor which showcases another multicultural family.

It’s a fascinating topic, and one of special interest to me, as my own family situation is quite similar to those we heard. 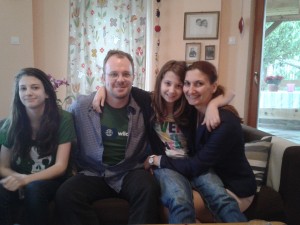 To acknowledge this, I brought along a short video of an interview with my younger daughter that I had filmed a few days previously. I think the students and the teachers really enjoyed hearing her talk about what it’s like to have a Hungarian mum and an English dad. She reckons it’s “cool” 🙂

The lesson really served to highlight the important role language plays in cementing relationships and bringing people together. One of the best reasons for learning English is to bring yourself closer together to others around the world. To finish off, we watched Do You Speak English? a short sketch from the BBC’s Big Train which looks playfully at the problems face by non-speakers of English in the modern world. Here’s a link to download it – or just google it. 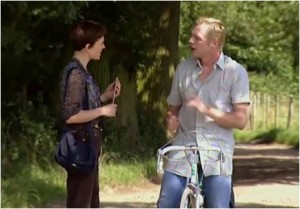